These findings are from the world’s biggest drug survey GDS2017 (including 69,000 cannabis users).

Congratulations, America. Don’t worry about your leader, fake news or the endless incredulous headlines that will no doubt follow in the coming months: it’s time to celebrate your position as the world’s most enlightened and healthy users of cannabis.

While 65 percent of the world’s cannabis users mix tobacco when they smoke cannabis—in the U.S. that figure is just eight percent. (Mexico is right behind you at nine percent, and Canada is not that far behind at 17 percent. See figure 1.) 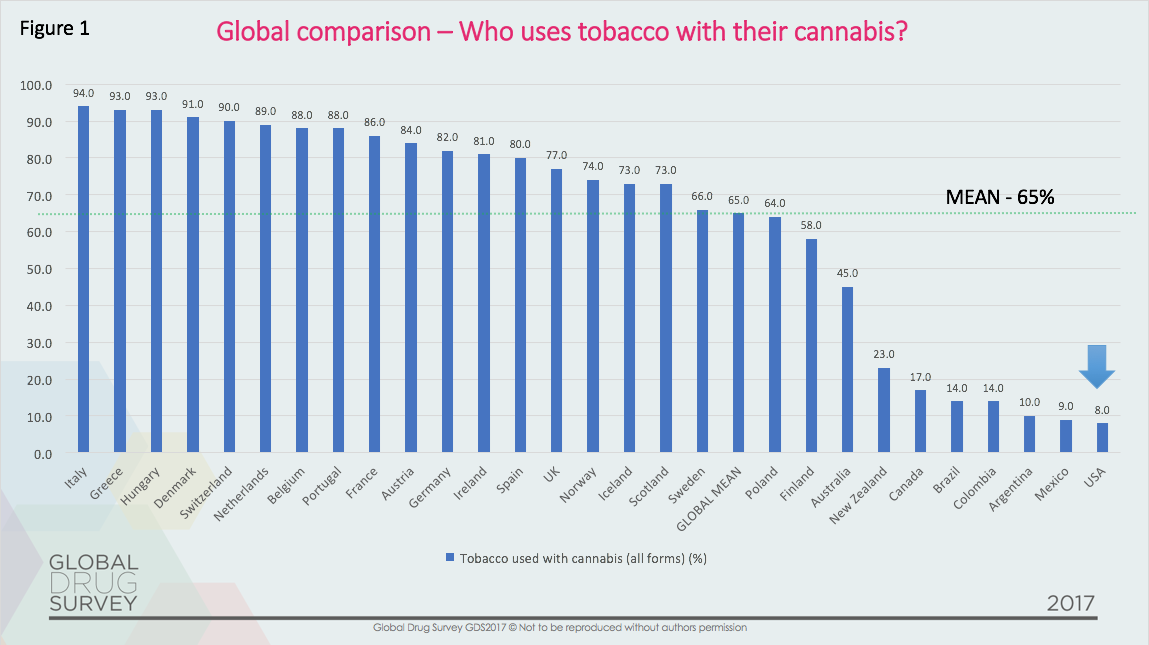 Part of the reason might be your preference for using pipes, preferred by 34 percent of U.S. cannabis users and bongs (26 percent), compared to joints which was the most common way of using for only 15 percent of U.S. respondents—compared to over 70 percent for the rest of the world. (See figure 2.)

Your preferred routes of smoking cannabis might also be linked to your preference for higher potency cannabis products. Sixty percent of American users cited a preference for high potency herbal cannabis, compared to a global average of 45 percent, and the U.S. reported the highest preference rate for concentrates (15 percent) compared to two percent elsewhere (largely because it’s not that widely available in other countries… yet).

And you are up there with the leading cannabis vaping countries (see figure 3) with 13 percent reporting vaping as their preferred method (second only to Finland—where the survey only reported 350 users, but they got gold with 19 percent, and a global average of six percent). That vaping is still a minority sport, even in the U.S. and Canada, says the world has a long way to go before vaping consigns smoking cannabis to the ashtray of history. 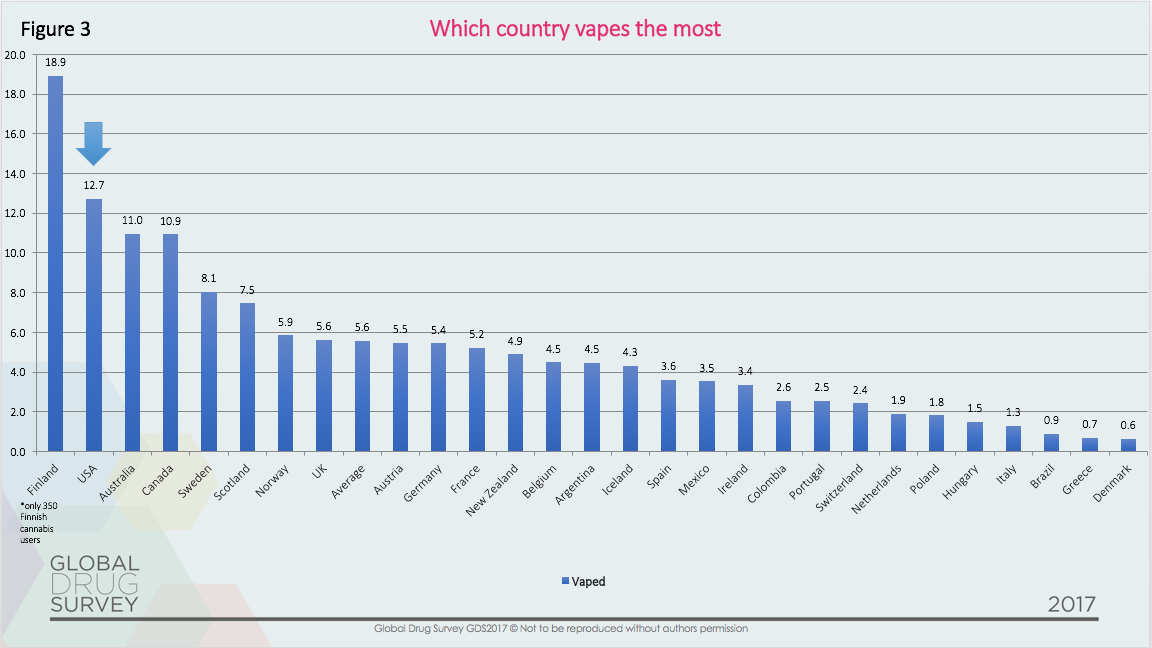 So far so good. On other metrics, you came first but perhaps for not the right reasons.

On average, U.S. respondents were stoned on more days in the last 365 than any other country (207 days compared to a global mean of 130). The U.S. also had the highest percentage of respondents reporting being stoned for 12 or more hours a day (13 percent, see figure 4), compared to the Dutch (two percent). 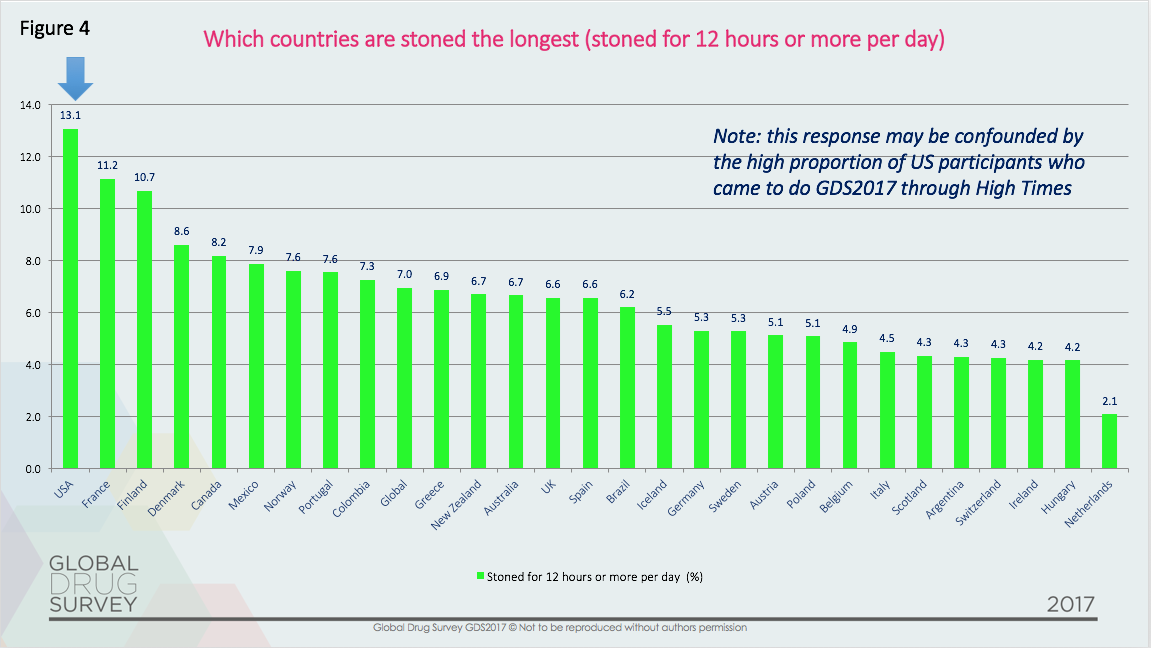 In summary, American cannabis users choose the safest way of using tobacco among any country in the world. They avoid tobacco and rates of vaping are very high compared to the rest of the world.

But respondents from the U.S. were more stoned, more often than any other country.

Now that is not necessarily problem.

But it might be since, as a rule, the more of a drug you use and the more often you use it, the more likely you are to run into health-related harms. At least in terms of acute risk of harm, this statement is not borne out by GDS2017 data on people seeking emergency medical treatment following the use of cannabis.

Across the world 0.6 percent of last year user of cannabis sought EMT (down from one percent last year). In the U.S., that figure was 0.4 percent.

This low rate might be explained by U.S. health care costs, insurance premiums and issues of confidentially that make it less likely for people to seek treatment in the U.S. if they run into health problems related to drugs. It might be a sampling issue, where U.S. respondents to the GDS2017 were very experienced users and knew how to avoid harm. I don’t know.

But what strikes me as weird, and I would love some feedback (nice or not!), is why relatively so few U.S. cannabis users indicated they wanted to use less cannabis in the coming year. You would expect that given the very high rates of heavy use in our study, that as a population, U.S. cannabis users might be more likely to want to cut down. Not a bit of it.

While across the world, an average of 36 percent of all cannabis users said that they wanted to use less (with nine percent wanting help to do so), in the U.S. that figure was 22 percent, with 12 percent wanting help to do so. That’s less than the Dutch, pretty much the least stoned nation we looked at and the least of all the English-speaking countries that we looked at including Canada. (See figure 5.) 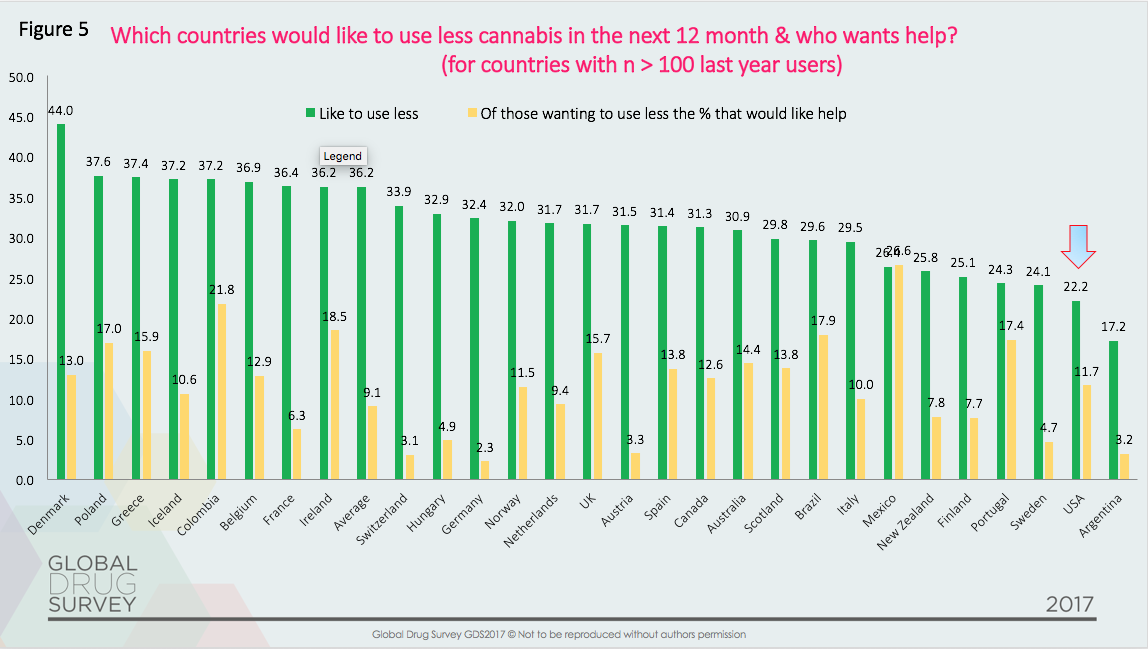 The question is whether this is an issue or not.

Are U.S. cannabis users just happy being stoned and don’t see a problem because there are none?

Are any concerns of health risk mitigated by relative safe methods of using and good levels of functioning and joy at the drug law reforms wafting across the U.S.?

Is it because the idea of waking up and seeing Donald in the White House means not being stoned is just too scary?

I don’t know, but it struck me as something worth asking and mirrors the very high levels of problematic drinking among the Dutch respondents to GDS2017 but very low levels of interest in using less. Ambivalence about our behaviors can be a troublesome thing. Sometimes, not thinking about change and defending the place we are is the safest and most comfortable place to be.

If are you one of the 25 percent of U.S. cannabis users who would like to use less check out a new video we’ll launch in early June on how to cut down, use more safely or stop available HERE.

Or if you just want some quick feedback on your level of use,  heck out the worlds first safer use guidelines at www.saferuselimits.co.

I wish the rest of world would learn how to use cannabis like Americans. But maybe just a little less.

If you want to test your knowledge about drug use around the world—spend four minutes and take the GDS2017 Quiz (some of the answers are in this piece, so don’t feel so clever!) HERE! www.globaldrugsurvey.com/QUIZ2017

A Father’s Story: From Suicidal to a Successful Cannabis Entrepreneur with Johnathan Henry0 Total Shares