Testicular cancer is cancer that starts in the testicles, the male reproductive glands located in the scrotum.

This is a slow-growing form of testicular cancer usually found in men in their thirties  and forties.   The cancer is usually just in the testes, but it can spread to the lymph nodes.  Seminomas are very sensitive to radiation therapy.

This more common type of testicular cancer tends to grow more quickly than seminomas. Nonseminoma tumors are often made up of more than one type of cell, and are identified according to these different cell types:

There may be no symptoms.  Symptoms that may occur can include:

Symptoms in other parts of the body, such as the lungs, abdomen, pelvis, back, or brain, may also occur if the cancer has spread.

A physical examination typically reveals a firm lump (mass) in one of the testicles.  When the health care provider holds a flashlight up to the scrotum, the light does not pass through the lump.
Other tests include:

An examination of the tissue is usually done after the entire testicle is surgically removed.

Treatment depends on the:

Three types of treatment can be used.

A man with one remaining testis can lead a normal life, because the remaining testis takes up the burden of testosterone production and will generally have adequate fertility.   However, it is worth the (minor) expense of measuring hormone levels before removal of a testicle, and sperm banking may be appropriate for younger men who still plan to have children,  since fertility may be lessened by removal of one testicle, and can be severely affected if extensive chemotherapy and/or radiotherapy is done.
Less than five percent of those who have testicular cancer will have it again in the remaining testis.  A man who loses both testicles will normally have to take hormone supplements (in particular, testosterone, which is created in the testicles), and will be infertile, but can lead an otherwise normal life.

Before 1970, men with recurrent testicular cancer were destined to have rapid progression and death from disseminated disease.  Currently, although 7000 to 8000 new cases of testicular cancer occur in the United States yearly, only 400 men are expected to die of the disease.  Much of this improvement is due to advances in adjuvant therapy.
Due to the risk of subsequent metastasis, post-surgical adjuvant therapy may be offered to the patient following orchiectomy.  The type of adjuvant therapy depends largely on the histology of the tumor and the stage of progression at the time of surgery. These two factors contribute to the risk of recurrence, including metastasis.  Adjuvant treatments may involve chemotherapy, radiotherapy or careful surveillance by frequent CT scans and blood tests by oncologists.
The three basic types of treatment are surgery, radiation therapy, and chemotherapy.
Surgery is performed by urologists; radiation therapy is administered by radiation oncologists; and chemotherapy is the work of medical oncologists.  In most patients with testicular cancer, the disease is cured readily with minimal long-term morbidity.

Orchiectomy
While it may be possible, in some cases, to remove testicular cancer tumors from a testis while leaving the testis functional, this is almost never done, as the affected testicle usually contains pre-cancerous cells spread throughout the entire testicle.  Thus removing the tumor alone without additional treatment greatly increases the risk that another cancer will form in that testicle . Since only one testis is typically required to maintain fertility, hormone production, and other male functions, the afflicted testis is almost always removed completely in a procedure called inguinal orchiectomy.  (The testicle is almost never removed through the scrotum;  an incision is made beneath the belt line in the inguinal area.)  In the UK, the procedure is known as a radical orchidectomy.
Retroperitoneal Lymph Node Dissection (RPLND)
In the case of nonseminomas that appear to be stage I,  surgery may be done on the retroperitoneal/Paraaortic lymph nodes (in a separate operation) to accurately determine whether the cancer is in stage I or stage II and to reduce the risk that malignant testicular cancer cells that may havemetastasized to lymph nodes in the lower abdomen. This surgery is called Retroperitoneal Lymph Node Dissection (RPLND).  However, this approach, while standard in many places, especially the United States, is out of favor due to costs and the high level of expertise required to perform the surgery.  The urologist may take extra care in the case of males who have not fathered children, to preserve the nerves involved in ejaculation.
Many patients are instead choosing surveillance, where no further surgery is performed unless tests indicate that the cancer has returned.  This approach maintains a high cure rate because of the growing accuracy of surveillance techniques.
Lymph node surgery may also be performed after chemotherapy to remove masses left behind, particularly in the cases of advanced initial cancer or large nonseminomas.

Radiation may be used to treat stage 2 seminoma cancers, or as adjuvant (preventative) therapy in the case of stage 1 seminomas, to minimize the likelihood that tiny, non-detectable tumors exist and will spread (in the inguinal and para-aortic lymph nodes).  Radiation is never used as a primary therapy for nonseminoma.

As an adjuvant treatment, use of chemotherapy as an alternative to radiation therapy in the treatment of seminoma is increasing, because radiation therapy appears to have more significant long-term side effects (for example, internal scarring, increased risks of secondary malignancies, etc.).  Two doses, or occasionally a single dose of carboplatin, typically delivered three weeks apart, is proving to be a successful adjuvant treatment, with recurrence rates in the same ranges as those of radiotherapy.  However, very long term data on the efficacy of adjuvant carboplatin in this setting does not exist.  Since seminoma can recur decades after the primary tumor is removed, patients receiving adjuvant chemotherapy should remain vigilant and not assume they are cured five years after treatment.  The concept of carboplatin as a single-dose therapy was developed by Tim Oliver, Professor of Medical Oncology at Barts and The London School of Medicine and Dentistry.

Chemotherapy is the standard treatment for non-seminoma when the cancer has spread to other parts of the body (that is, stage 2B or 3).  The standard chemotherapy protocol is three, or sometimes four, rounds of Bleomycin-Etoposide-Cisplatin (BEP).  This treatment was developed by Dr.Lawrence Einhorn at Indiana University.   An alternative, equally effective treatment involves the use of four cycles of Etoposide-Cisplatin (EP).

While treatment success depends on the stage, the average survival rate after five years is around ninety five percent , and stage 1 cancers cases (if monitored properly) have essentially a one hundred percent  survival rate (which is why prompt action, when testicular cancer is a possibility, is extremely important).

In the New England Journal of Medicine, treatment of testicular cancer has been called one of the success stories of modern medicine, with sustained response to treatment in more than ninety percent  of cases, regardless of stage.   Because of advances in chemotherapy, cure rates now approach eighty five percent  overall, with better than ninety five percent for localized disease and eighty percent  for metastatic disease—the best response by any solid tumor. 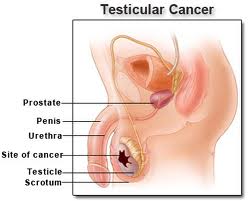 The use of cannabinoids in treating the side effects of cancer chemotherapy is more widely-studied than many other potential therapeutic applications, and a number of clinical studies have taken place investigating the use of THC and synthetic cannabinoids as anti-emetic agents. Two preparations have been licensed for use in clinical treatment either in the UK or elsewhere, including dronabinol (synthetic THC) and Nabilone (a novel synthetic cannabinoid).

Side effects of chemotherapy and wasting diseases: The powerful drugs used in cancer chemotherapy effectively kill reproducing cells, including both the malignant tumour cells and also, as a side effect, many cells continually reproducing such as hair follicle cells and those lining the gut, leading to severe nausea & vomiting. These side effects can be very severe and many patients find these difficult or impossible to tolerate, falling into a wasting syndrome through malnutrition brought on by a combination of reduced appetite and poor gastrointestinal efficiency, which can itself shorten life expectancy.

There is variation between the effects of different anti-cancer drugs. Cisplatin, one of the most effective chemotherapy agents, induces vomiting in over 99% of patients not taking an antiemetic, with around 10 vomiting episodes per dose, although methotrexate causes emesis in under 10% of patients .
The main beneficial effects reported from use of cannabinoids are a reduction in the incidence and severity of nausea and vomiting (emesis), and stimulation of appetite, together reducing the severity of cachexia – wasting syndrome – in patients receiving chemotherapy treatment.
Studies involving natural cannabis: Vinciguerra et al studied 56 cancer patients unresponsive to conventional antiemetic agents, who were asked to rate the effectiveness of marijuana compared to prior chemotherapy cycles. Smoked marijuana was rated as “moderately effective” or “highly effective” by 78% of patients. The authors concluded that marijuana had antiemetic efficacy, but no control group was used and the patient population varied with respect to prior marijuana use or THC therapy.

Recent scientific developments-anti-tumour activity:  Recent scientific advances in the study of cannabinoid receptors and endocannabinoids have produced exciting new leads in the search for anti-cancer treatments, with CB1 and CB2 agonists (like THC) associated with tumor regression, reduced proliferation and blood supply to tumors, and apoptosis (programmed cell-suicide) among cells of various cancer types.

Blazquez et al reported “Cannabinoids, the active components of marijuana and their derivatives,  induce tumor regression in rodents… Inhibition of tumor angiogenesis may allow new strategies for the design of cannabinoid-based anti-tumoral therapies.” Sanchez et al reported “growth of the rat glioma (one of the most malignant forms of cancer) is inhibited by psychoactive cannabinoids” and that “local administration of (a) selective CB(2) agonist induced a considerable regression of malignant tumors”.

Parolaro et al concluded “Modulation of the endocannabinoid system interferes with cancer cell proliferation either by inhibiting mitogenic autocrine/paracrine loops or by directly inducing apoptosis; however, the proapoptotic effect of anandamide is not shared by other endocannabinoids and suggests the involvement of non-cannabinoid receptors” Bifulco & Di Marzo reviewed studies of antitumor activity and concluded “Recently, evidence has accumulated indicating that stimulation of cannabinoid receptors by either THC or the endocannabinoids influence the intracellular events controlling the proliferation and apoptosis of numerous types of cancer cells, thereby leading to anti-tumor effects both in vitro and in vivo. This evidence is reviewed here and suggests that future anti-cancer therapy might be developed from our knowledge of how the endocannabinoid system controls the growth and metastasis of malignant cells.”

There would appear to be growing evidence of direct anti-tumor activity of cannabinoids, specifically CB1 and CB2 agonists, in a range of cancer types including brain (gliomas), skin, pituitary, prostate and bowel. The antitumor activity has led in laboratory animals and in-vitro human tissues to regression of tumors, reductions in vascularisation (blood supply) and metastases (secondary tumors), as well as direct inducement of death (apoptosis) among cancer cells. Indeed, the complex interactions of endogenous cannabinoids and receptors is leading to greater scientific understanding of the mechanisms by which cancers develop.

In the very least, cannabinoids should be used as adjunct treatment for testicular cancer.  Use whole plant extracts from Sativa x Indica hybrids.

Angela Harris is an internationally-known Master Herbalist, a wife, and a mother to nine beautiful...

CBD, short for cannabidiol, is a compound found in cannabis that has gained prominence in recent...